The LCK Spring Playoffs are coming to an end: DK & Gen.G will face each other this upcoming Saturday at 10 AM (CET) to see who’s going to win the LCK Spring Championship. Let’s take a look at each team separately and what we can expect going into this series.

Our odds and betting predictions are at the bottom of the article, if you are too TL:DR for the analysis, just scroll down. After finishing in 2nd place at the end of the split, Gen.G looked in good shape coming into the playoffs. Their series against DK was a preview of the battle between the top 2 teams in the LCK. By coming out victorious, Gen.G arrived with strong momentum: their performance got better towards the end of the split, with the meta favoring them quite a lot.

This is because Gen.G has always been known for playing scaling team comps that would allow them to win late-game team fights. They always draft at least 2 to 3 champions that come “online” after the 30-minute mark.

This playstyle coincides with many teams across regions that also draft team fight comps. Teams like MAD Lions & Team Liquid also have a similar view of the game. And it seems to work really well for them…

In the Playoffs Semi-Finals, Gen.G quickly took down T1 in a very one-sided series. While many fans expected it to be a closer one, Gen.G’s draft all0wed them to always have an advantage the longer the game went on. The team always executed according to their win condition and they fully deserved the victory. Nonetheless, the team does have some weaknesses. They seem to struggle against Seraphine & Gnar, which got banned out all the time in the series against T1. Gnar is highly contested across the world & DK surely can play it. They will have to find a way to play around it or their bans will become very predictable…

In addition, jungle will surely be the most important key for the whole early-to-mid transition. Gen.G must find a way to give their jungler Kim “Clid” Tae-min an opening and enable him to control the flow of the game. Since Hecarim & Udyr are the most contested picks, we will surely see the two teams trading the champions back & forth, depending on who’s picking first.

If Gen.G is able to control and fight back DK’s aggression, the team will surely have a chance to win. The problem, however, is that’s easier said than done…

DK – The Best of the Best

After winning the Worlds 2020 last year, DK came back to the LCK to dominate the region, ending the split with a 16-2 record. Despite losing their top laner Jang “Nuguri” Ha-gwon, DK was able to quickly readjust.

The team found the perfect weakside player in Kim “Khan” Dong-ha, who performed really well after some rough splits. By absorbing pressure on the top side of the map, his teammates are able to focus to capitalize on mid-bot. With such strong individual players, DK is always able to find leads and snowball the game. 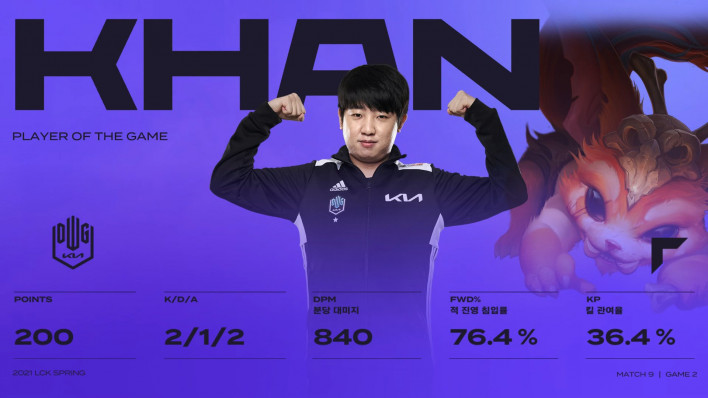 Being able to carry from whatever position is something that you don’t see quite often in LoL. DK, however, is one of those exceptions. The team can reliably draft so many different compositions while having the confidence of piloting them. This is what makes DK one of the best teams in the world. They have the ability to adapting to any type of meta there is, and still be one of, if not, the best team overall.

My prediction for this series is 3-1 for DK. Despite losing their last series against Gen.G, the 2020 World Champions are still looking strong. They can play so many different things: in a Bo5 series, it is an extremely important advantage that they will have.

Gen.G will surely have a chance, but they must be able to hold until they are able to win those late-game fights. If you are looking into LCK Betting, this match is a good place to start. Placing a wager on DK will net you a 1.26x return on your investment over at GG.BET. Going for the correct score however, will net you x3.21.

Finally, the best way to approach betting on this matchup is to play Map duration over 34.5 on every map played during this series. Live betting is the way to go here, and odds will exceed over x2.5 regardless, so you can play a pretty safe progression in your bet amount to always stay ahead.